I'm going to tell you about Cuween Hill Chambered Cairn - my favorite tomb.

I get the humour in that statement, but there are many ancient cairns in Orkney. People naturally tend to have a favorite. The one that's rested atop Cuween Hill for over 5,000 years is mine. 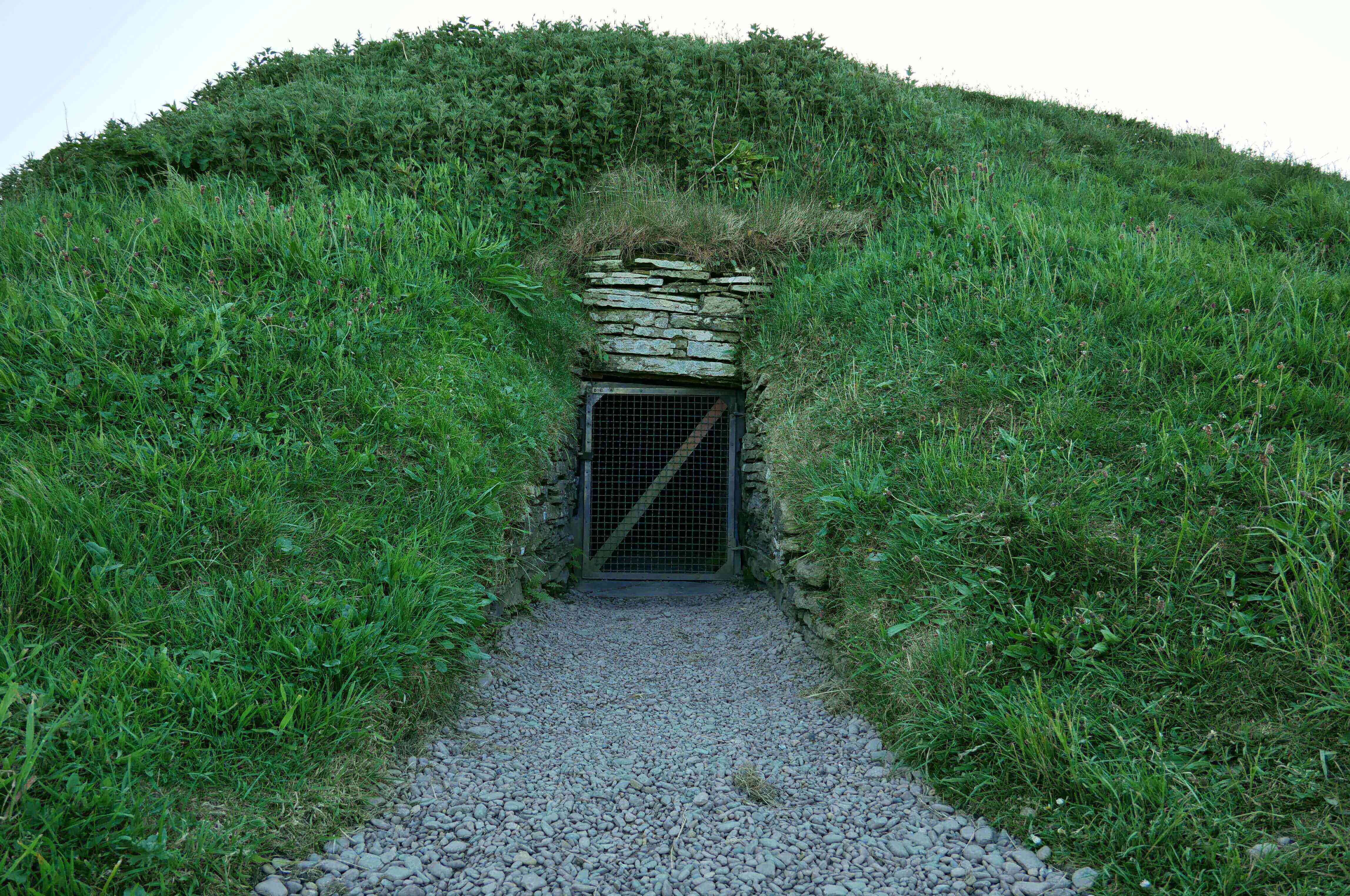 Please respect this sacred space, and close the gate when you leave.

You'll have to hike uphill to visit it, as the tomb is situated on a lovely hillside overlooking the Bay of Firth. It's worth the effort. Because of this slight inconvenience, you'll never run into masses of visitors here. 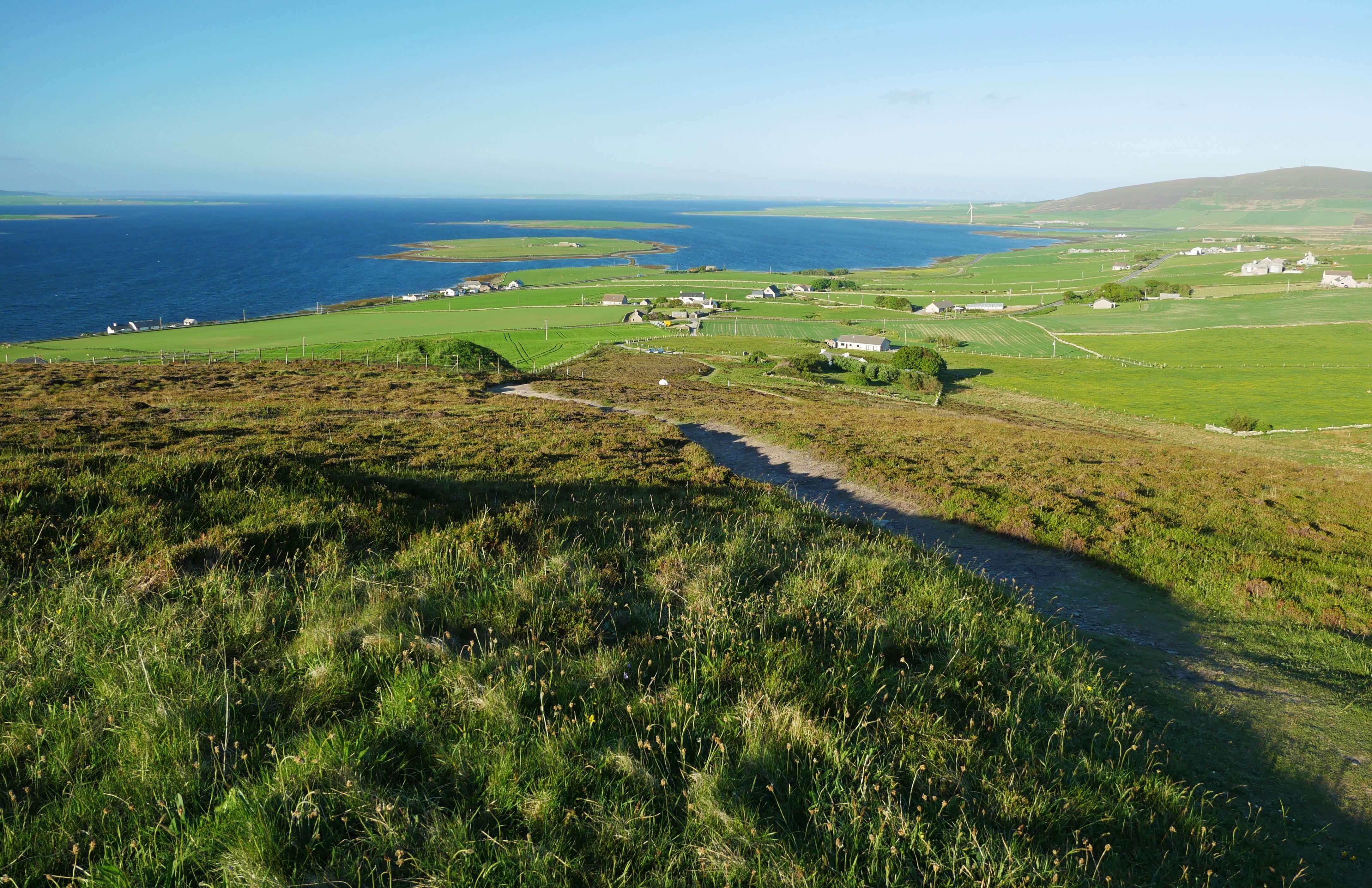 "Cuween" derives from the Old Norse for "cattle pasture." The site is still surrounded by farm land.

One of the nicest things about this cairn is its feeling of authenticity. Dark and intensely quiet inside, some people find Cuween tomb a more rewarding experience than Maeshowe.

No shuttle buses, no waiting in line, no crowds ... and no fee. And you can stay as long as you like.

You might share the space with a dog-walker or a visitor or two. But you're just as likely to find yourself in there all alone, soaking in the moving and mysterious atmosphere of this ancient structure.

What's on this page?

Archaeology: what we found at the tomb and village

Folklore at the fairy hill

A forensic reconstruction was commissioned by Historic Environment Scotland, showing us what Neolithic dogs looked like.

The reconstruction was made using one of the 24 dog skulls found in Cuween Hill. 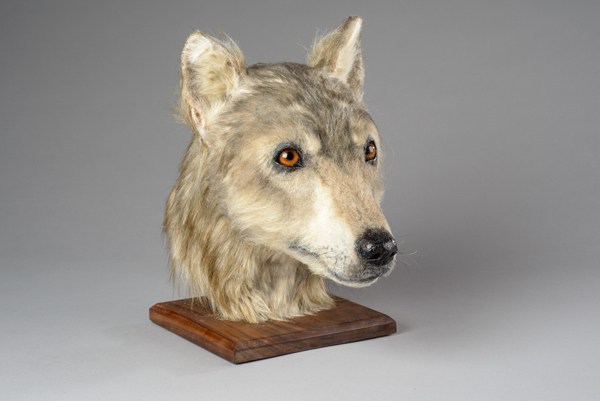 These dogs would have likely lived in the Stonehall settlement below the tomb and hunted on the hillside. There would have been no rabbits, hares or rats to chase in those days - just voles and the odd red deer calf.

Digging in the village

I loved working on the Stonehall dig. It was such fun and in a beautiful location. It was  strangely carefree during a time when life was not easy.

My son, Danny, used to come digging with me in the school holidays. I was proud to see dusty lumps being brought to my ten-year-old boy  by archaeology students who would ask, "Danny - is this a stone or a piece of pottery?" I kept my eye on him. He had a 100% success rate in his identification.

Proud dad! Proud of both of my kids, and my step-kids, for whom I coined the term 'faux-pa'. It amused me.

What did we find in Stonehall - the Neolithic settlement below the cairn?

Memory of a dig

In the early 90s, the excavation at Barnhouse near the Stones of Stenness was drawing to an end. My friend, Dr Colin Richards, asked me if we would host an evening for the public at the Orkney museum, where I work. People were asked to bring in artefacts they'd found on their land for identification.

The event turned up some interesting pieces, but not what Colin was looking for. He had hoped that there might be a large collection of flint, either worked pieces or debitage - flakes that result from flint knapping. When an archaeologist finds a large flint scatter, he knows the home of the ancient flint knapper must be nearby.

Just as we were about to close for the evening an elderly gentleman arrived, clutching a small tin box. This was what Colin had been looking for – a huge collection of flints. Ronnie Flett of Stonehall in Firth told us that these flints had been collected by his father from one spot in a field where he ploughed with horses.

This field, Ronnie said, was just below Cuween Hill Tomb. He then produced half a cushion macehead that he'd discovered near the tomb.

He had our attention.

A geophysical survey of the corner of the field showed structures just inches under the soil. The land rose into a slight mound over this spot. In 1994 a small team started excavations.

Our first find was an early Neolithic house from around 5,500 years ago. At the time, this discovery was quite a rarity in Orkney. The house was rectangular with rounded ends, divided into two rooms by upright flagstones.

We later discovered another early Neolithic house. I explored a ditch between these houses, revealing the floor level of a house and pieces of Unstan Ware pottery in use at this period.

We made another exciting discovery on top of a natural mound nestled in the slopes of the hill above the site - another well preserved early Neolithic house.  Further exploration revealed two more houses.

The first was in a prime location, but little of it survived. A second house had been built beside it, but not over it. This too had been demolished, leaving only the bottom courses of stone and the stone sill that defined the threshold of the house.

Inside were the remains of the hearth - incredibly, still containing the ashes from its last fires.

Old Orkney lore says that it's bad luck to let your fire go out. The luck of the house depends on the hearth fire burning continuously. I wonder if the carefully preserved hearth was an ancient example of this tradition?

The Neolithic settlement of Stonehall was covered over after the excavation. The marks show the location of the buildings we found - smaller rings show early Neolithic structures and the larger ring shows where we found the late Neolithic village.

Beside this house on a sloping site was a well-preserved house. It seemed to us that every time a house went out of use it was demolished and another one built, but not directly over the earlier one.

Down in the original field, next to the first of the early houses, was a late Neolithic site, dating from around 5,000 years ago. There we found a badly damaged house of the Skara Brae type - square, with rounded corners. This house had fallen foul of farming. The stones dislodged by the plough had been long ago carted off the field.

A second house here was much better preserved, and told a unique story.

Though the house was of standard size, the floor level was higher than it should have been. This compacted clay covered the floor of the whole building. Curiusly, the house lacked the dresser, beds and hearth that we expected to find. Instead, there was a pit in the centre where the hearth should have been. In the place of the dresser and beds were three "cists", each pit covered with a slab.

One cist yielded several large flint blades and scrapers, but another was even more interesting. Colin suggested that we lift the slab I was working on. We carefully tilted it back. A stone grinder, shaped like a stone bun with a flat bottom, was stuck to the underside of the slab.

My friend Colin has a reputation for being a lucky digger - ‘jammy’ is the word we use. As we placed the stone on the side of the trench, Colin said, “Better check the edges for decoration.” I examined the slab while Colin grabbed my trowel and dug into the cist.

I heard a gasp. I looked up from my work and saw Colin holding a beautiful white quartz axe. It sparkled like ice in the first sunlight this beautiful thing had seen for 5,000 years. The axe was not quite finished, and of no practical use as an axe. The quartz would have shattered.

The fact that the axe was put into the cist sets it aside as special in some way: was it considered a very valuable item ... a status symbol ... symbolic ... ritualistic? We'll never know.

More importantly, why did that jammy Colin have to find it, and not me?

Not that I'm bitter.

Neolithic sites are steeped in mystery. In many ways, we simply don't understand all that we uncover. We can't help but see through modern eyes, but there were very different people once living in Orkney.

What I remember most about the Stonehall dig was standing in a house that had once contained household furnishings, later to be altered into a sacred place. Maybe the transformation came after the death of the person who lived there?

I looked up at Cuween Hill Tomb, silhouetted against the skyline. That tomb dominated the village. It seemed a powerful statement of belonging.

The people who lived here could point to the tomb and say, “This land is ours, for our ancestors stand guard over our village.” 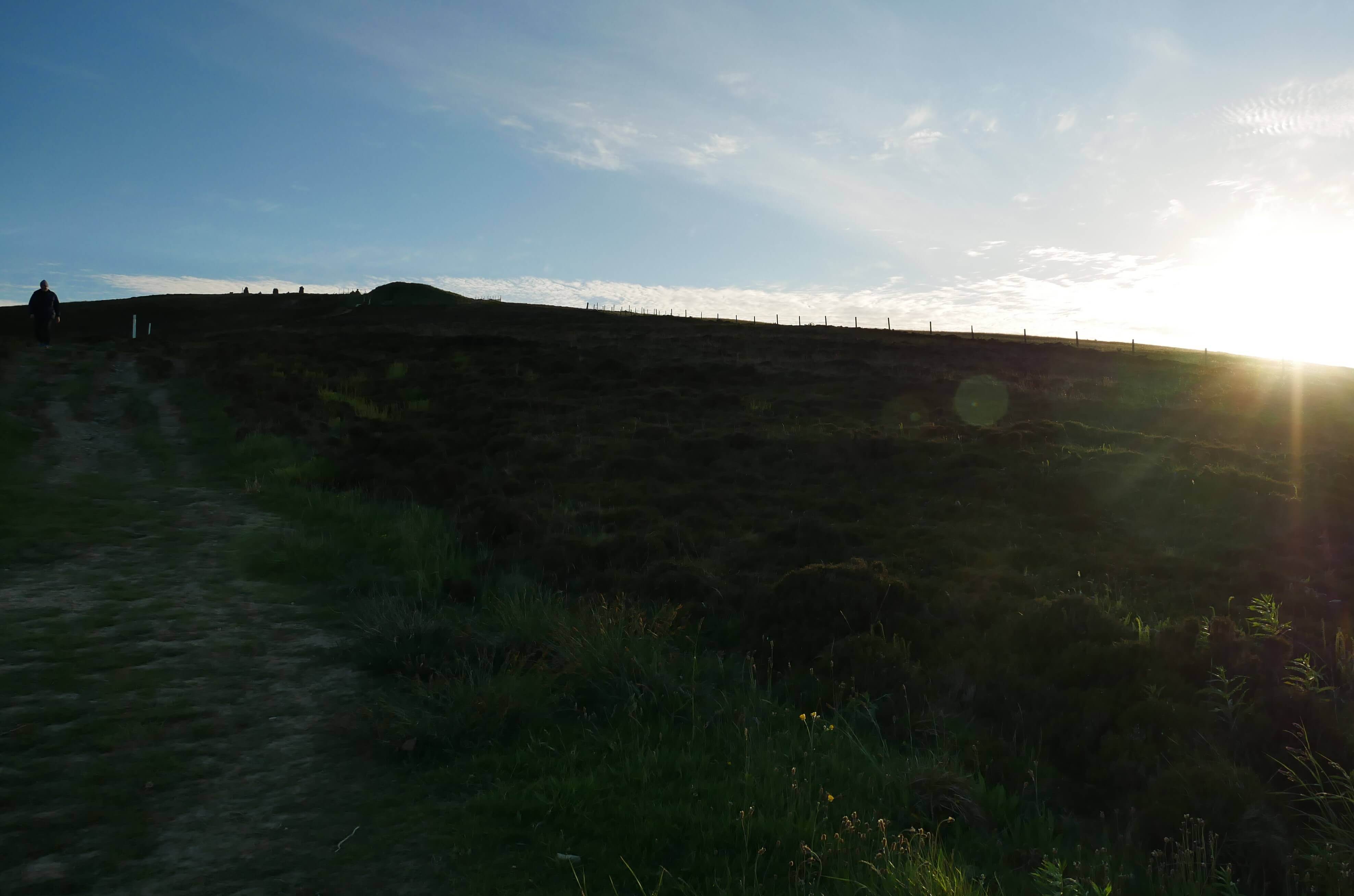 Folklore at the fairy hill

I've been working with Historic Environment Scotland on the new Cuween interpretation panels, as they will include folklore.

There will be a lovely trow illustration to go with Cuween - the 'fairy hill,' as it was known.

I also got to select the best dwarf illustration for the Dwarfie Stane in Hoy ... but that's a tale for another day.

Look inside the tomb

Enjoy a peek inside Cuween Hill Chambered Cairn with this 3D model below, created by my friend, Dr Hugo Anderson-Whymark.

Visit the ancestors at Cuween Hill

Use the map below to find your way to Cuween Hill. It's easy to get to, being situated between Kirkwall and Stromness, near Finstown.

If you don't have a car, you can get off the bus anywhere nearby. There's a car park midway up, and then a bit of a hike (steep, but not difficult) up to the tomb, and then climb over a stile. 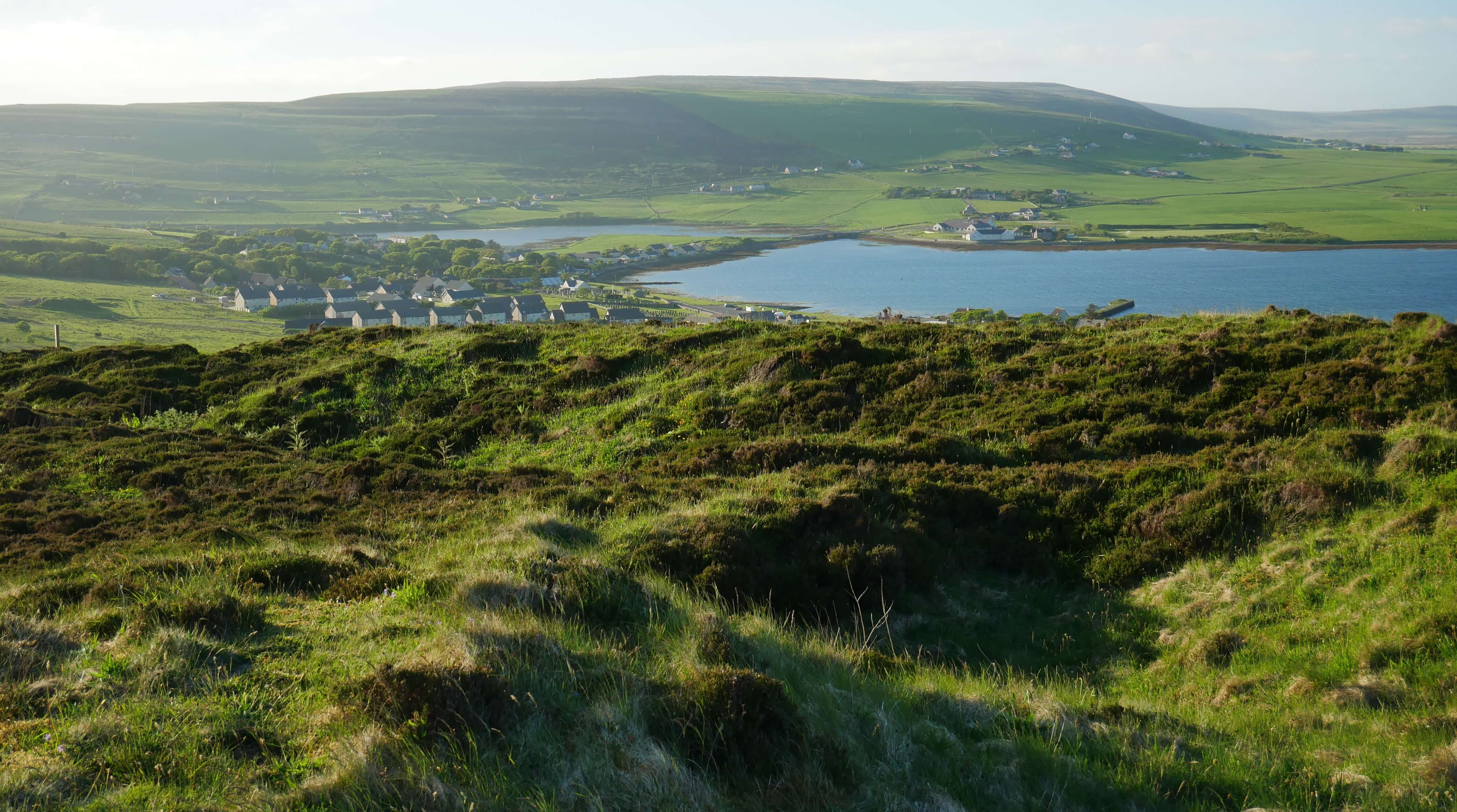 The Cuween Hill tomb is not one of the more claustrophobic, as such structures go. You have to crawl through a stony, dirty passage for roughly 5 metres. (Wear old trousers.) When you reach the main chamber you can stand up comfortably.

A new roof replaces the one destroyed by archaeological pirates of the past. It's likely that the original roof was higher. Notice the beautiful corbelled stones in the walls.

Unlike Unstan Cairn - another favorite tomb, but with a rebuilt roof that lets light in - this cairn carved into the rock of Cuween Hill is pitch black inside. It's easy to imagine this place thousands of years ago, the important center of a Neolithic community. 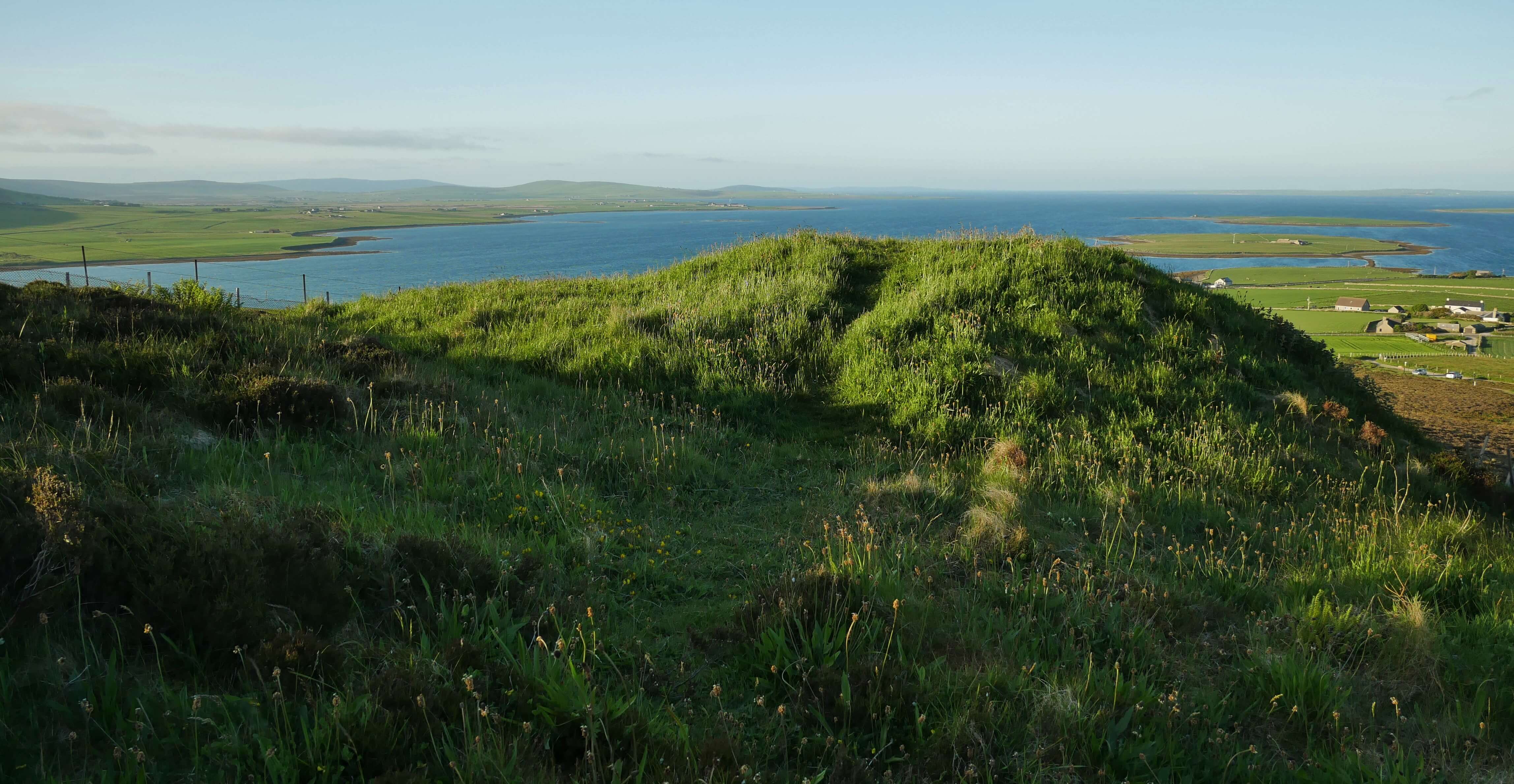 A bonus at this site are the impromptu modern "cairns" built by visitors during the past few decades. You'll find them just above the tomb. 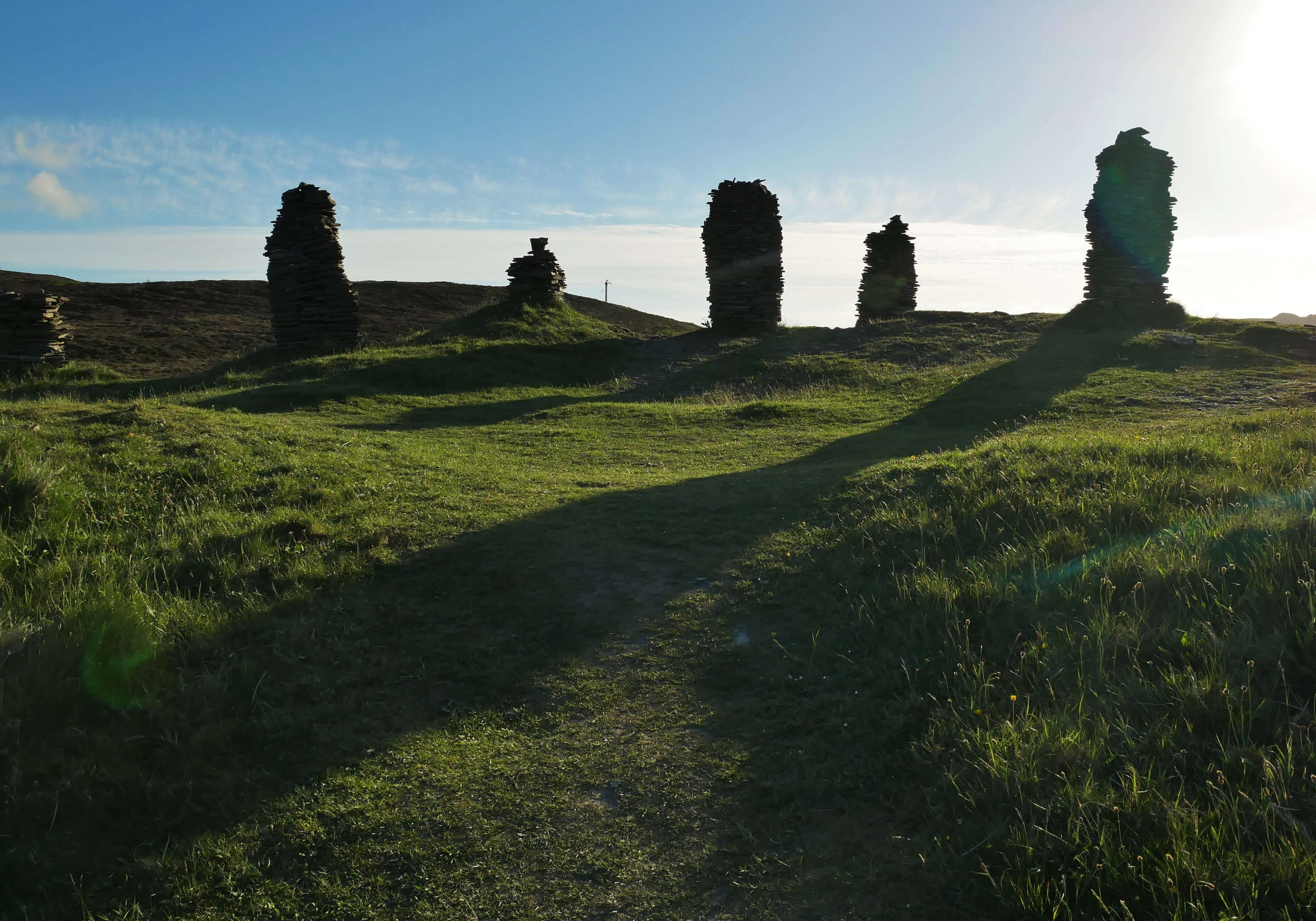 As is usual in Orkney ... the view is incredible.

Note: A torch (flashlight) is left outside in a box for visitors to use. However, since we often find it stone dead, we recommend bringing your own, or use the light on your phone.

We hope you enjoy visiting our favorite tomb! 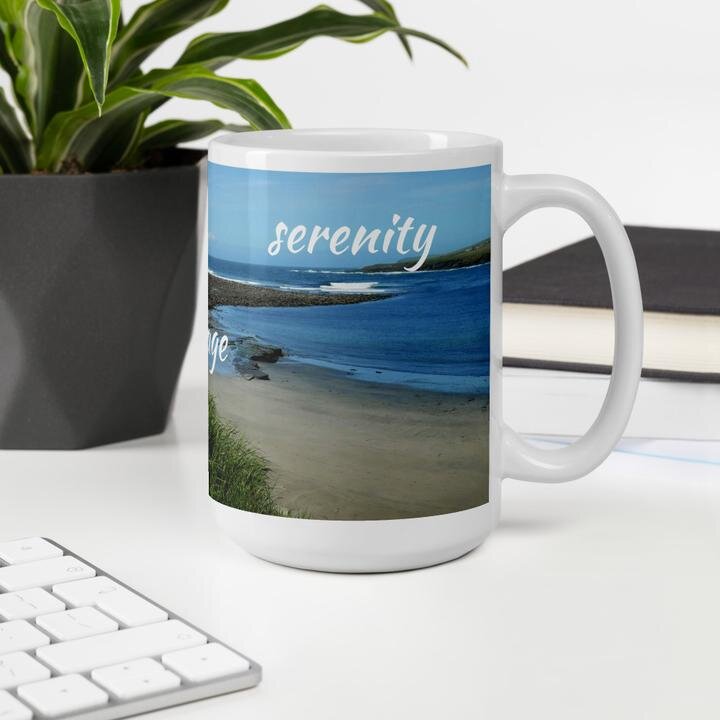 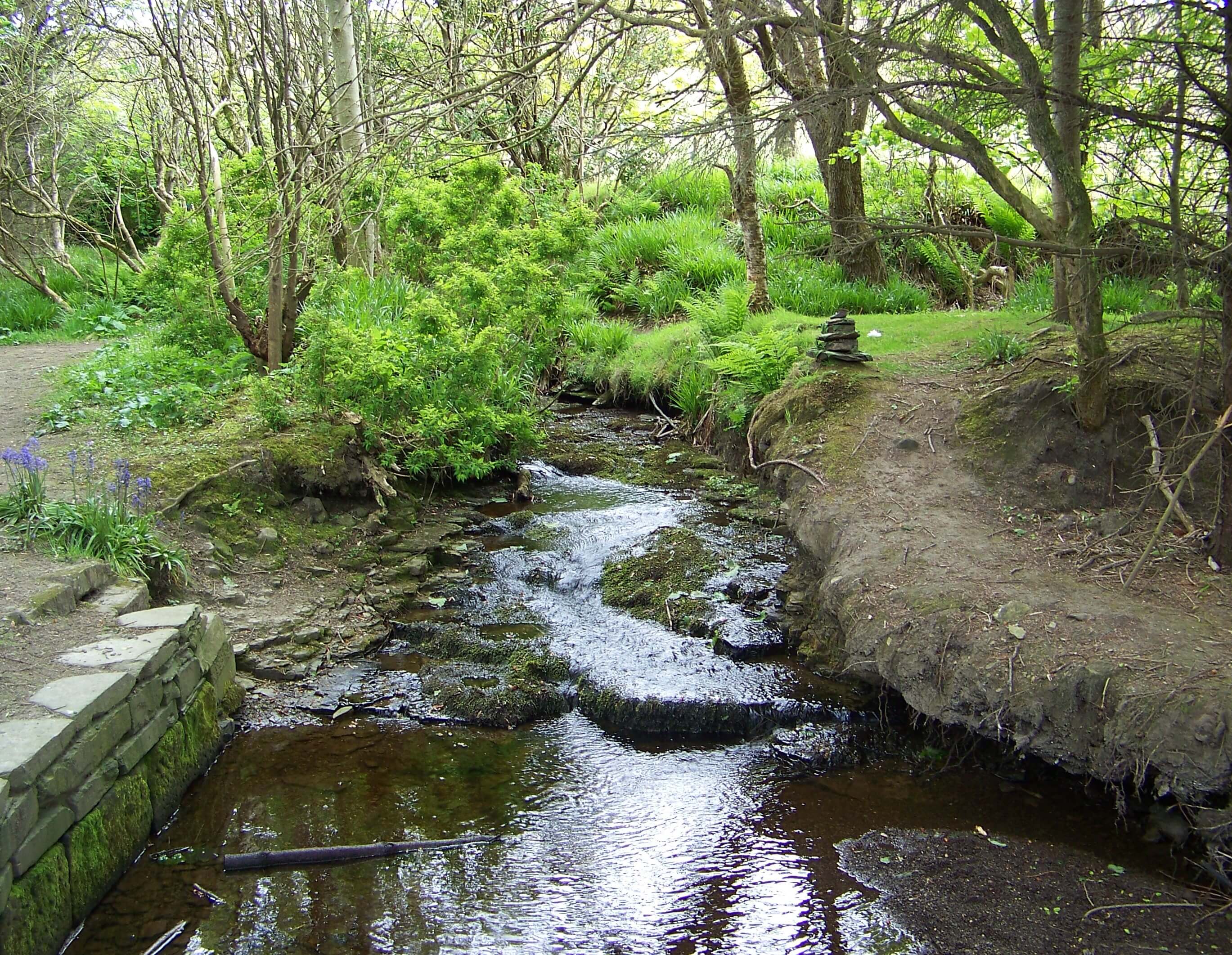 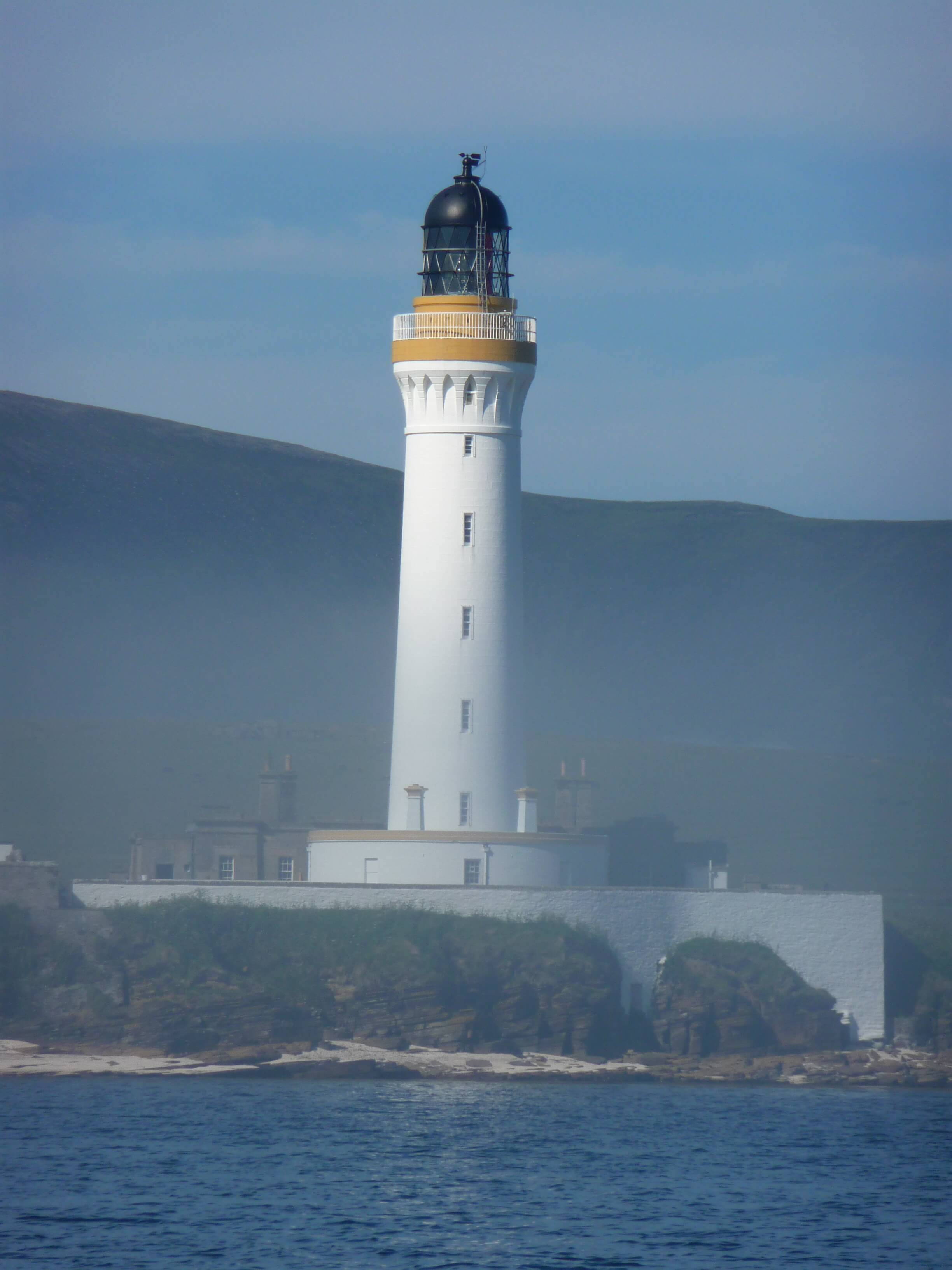 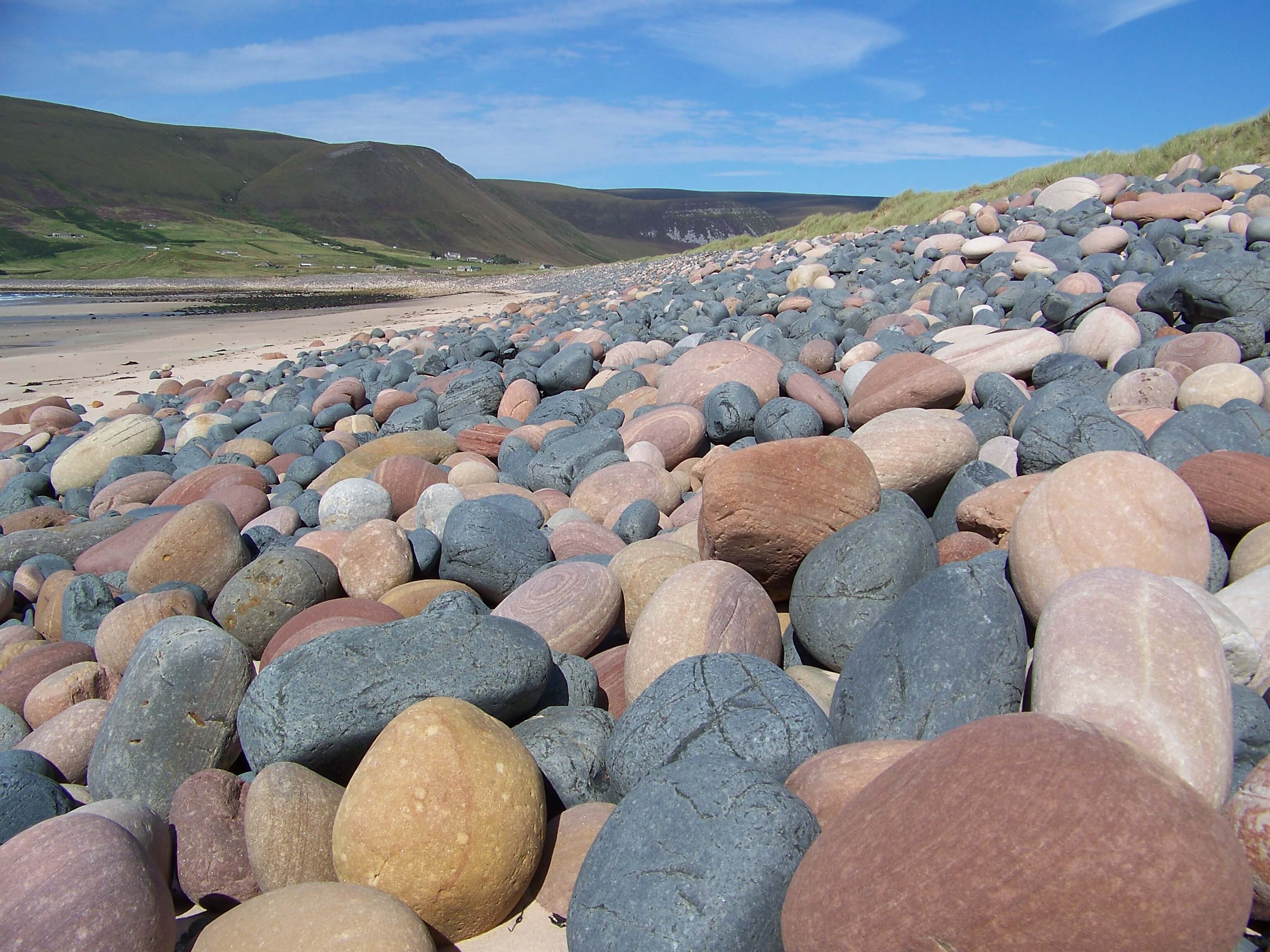 Enchanting Rackwick Bay on the island of Hoy 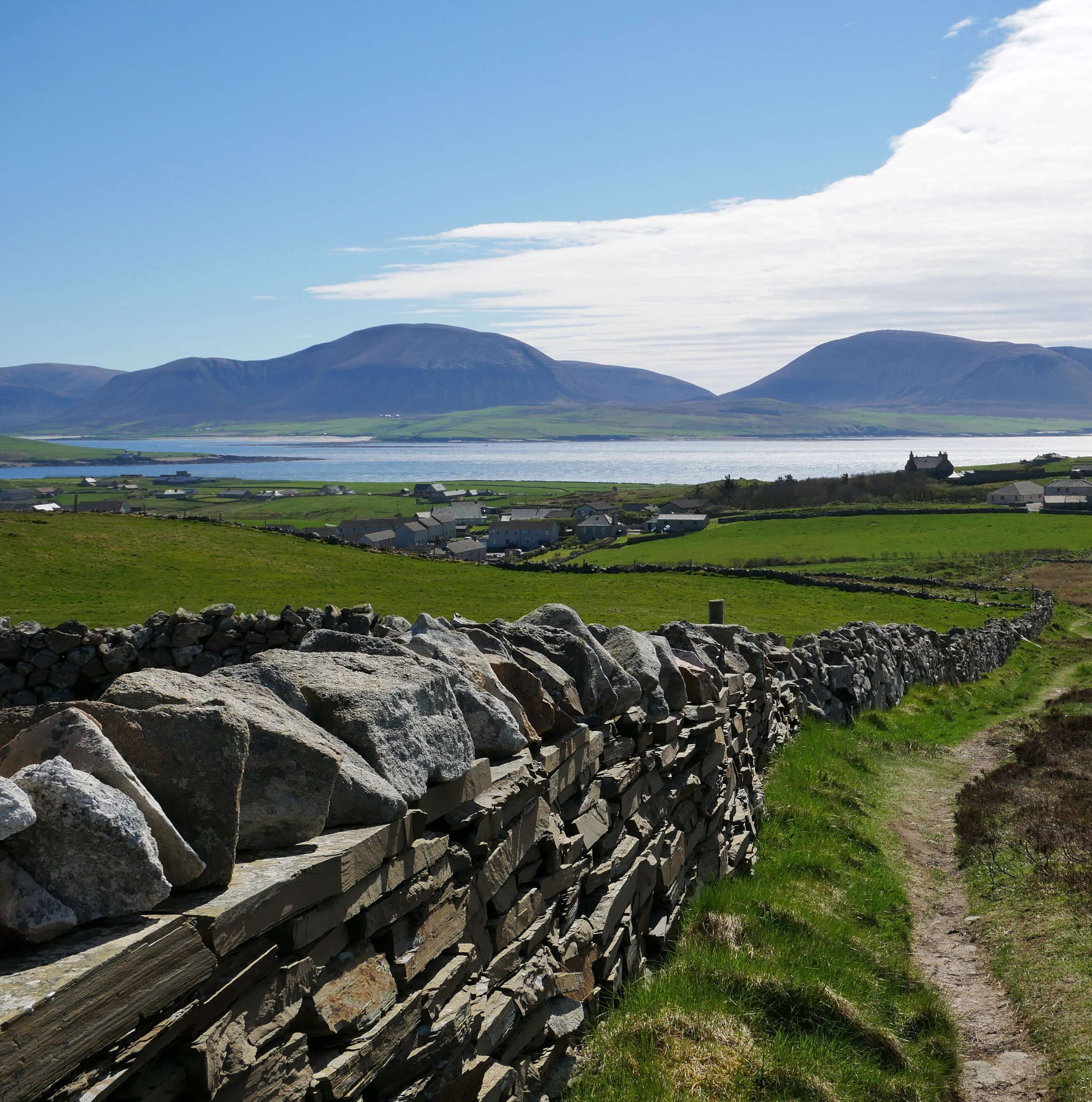 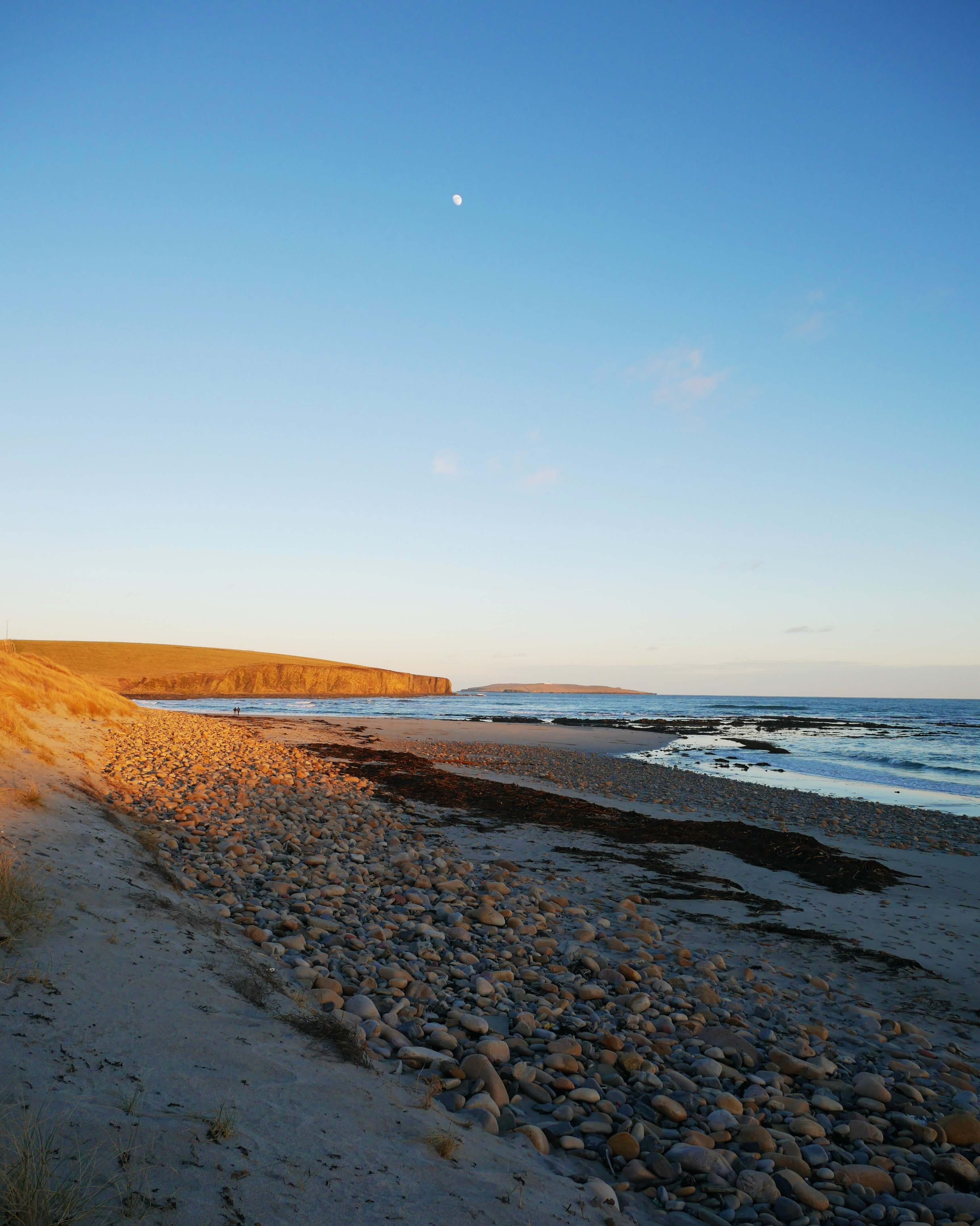 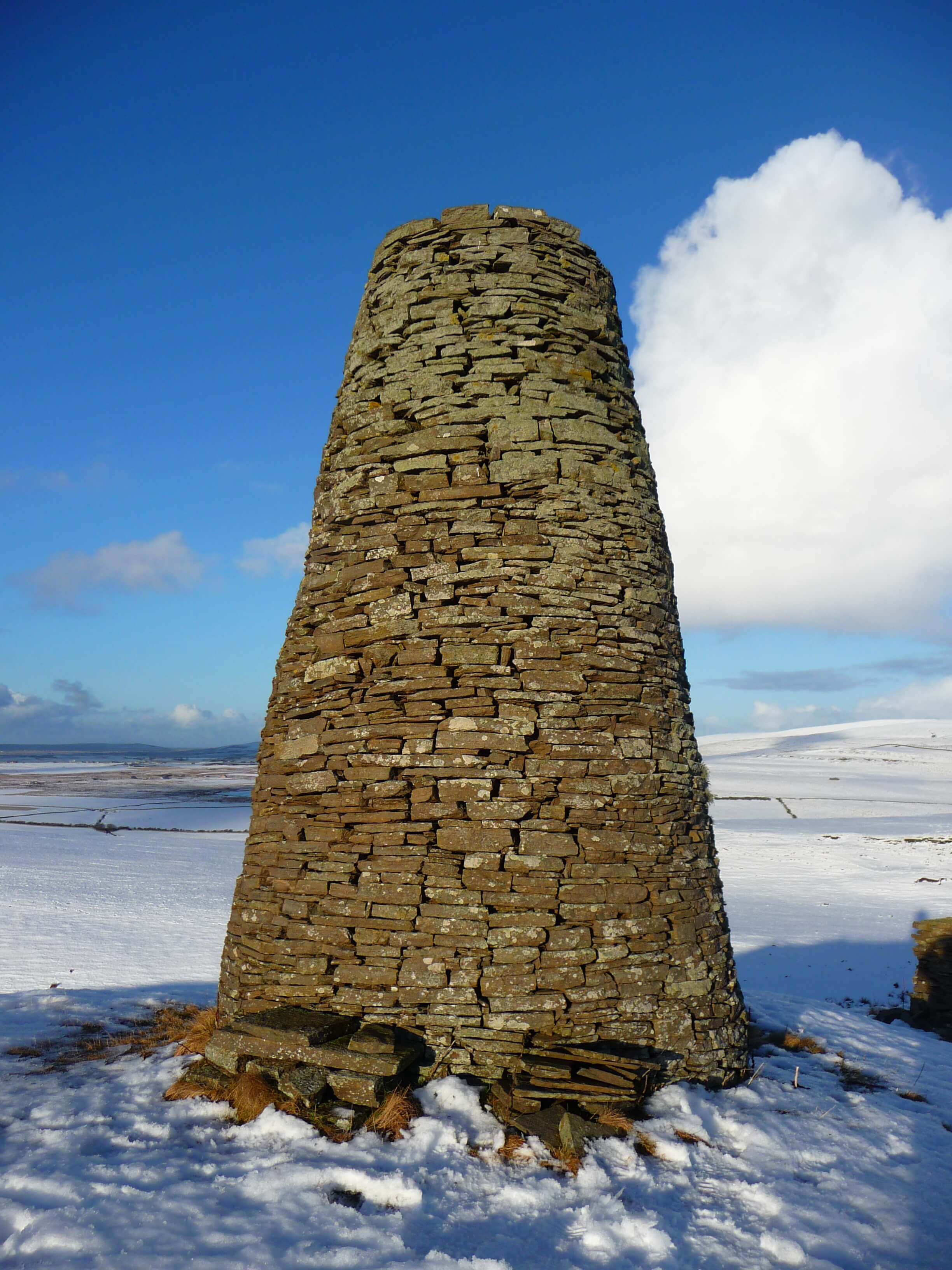 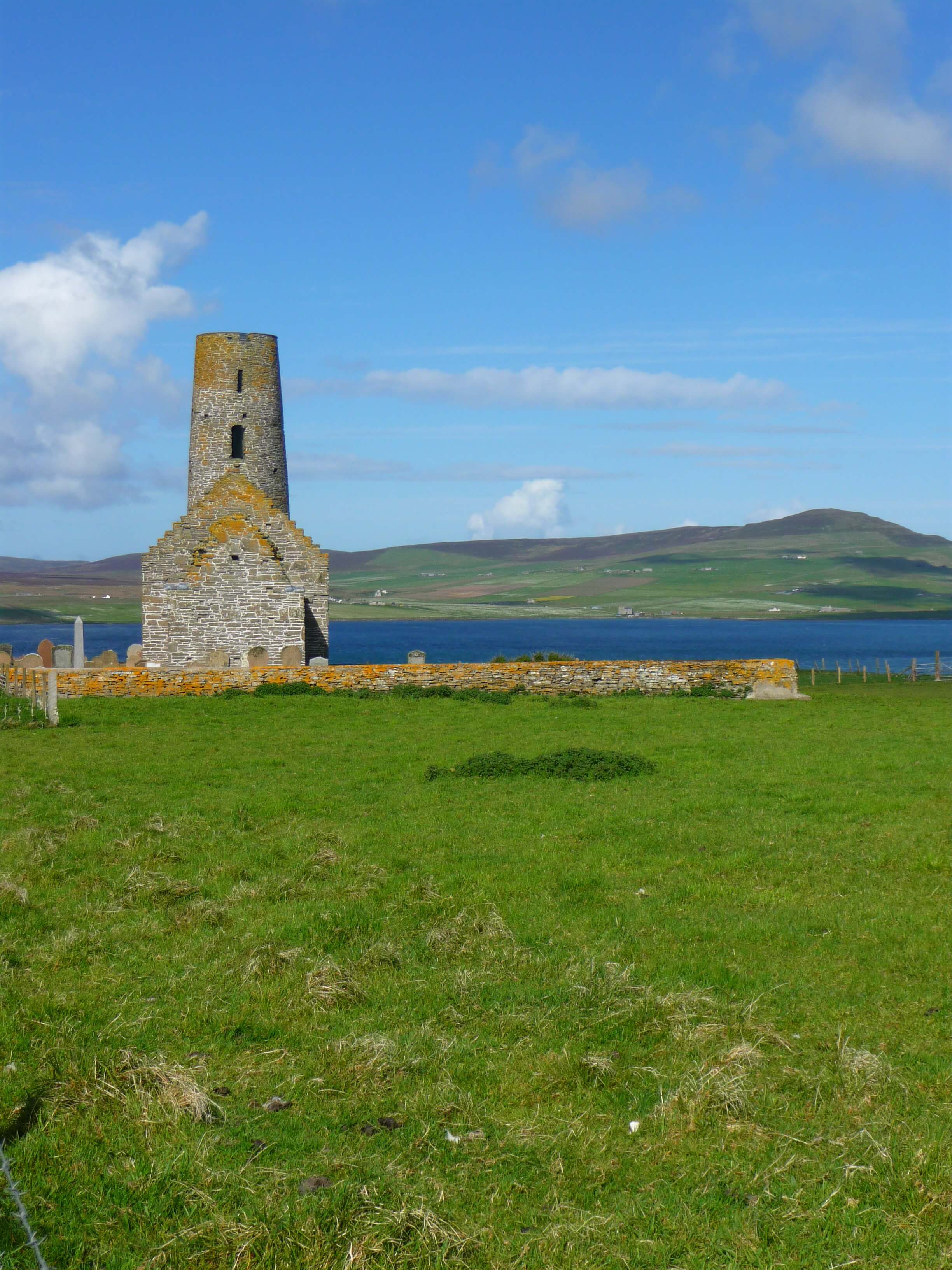 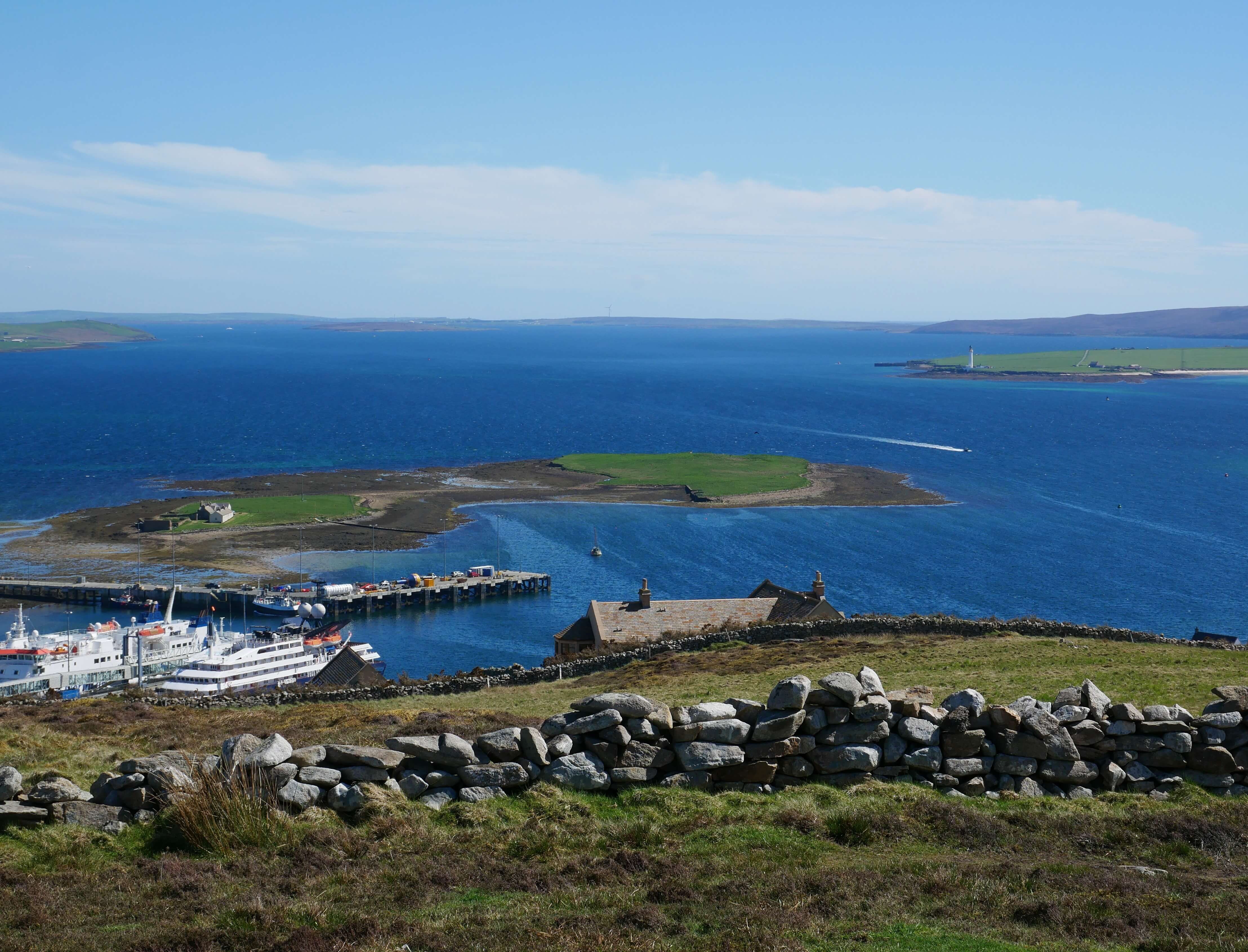 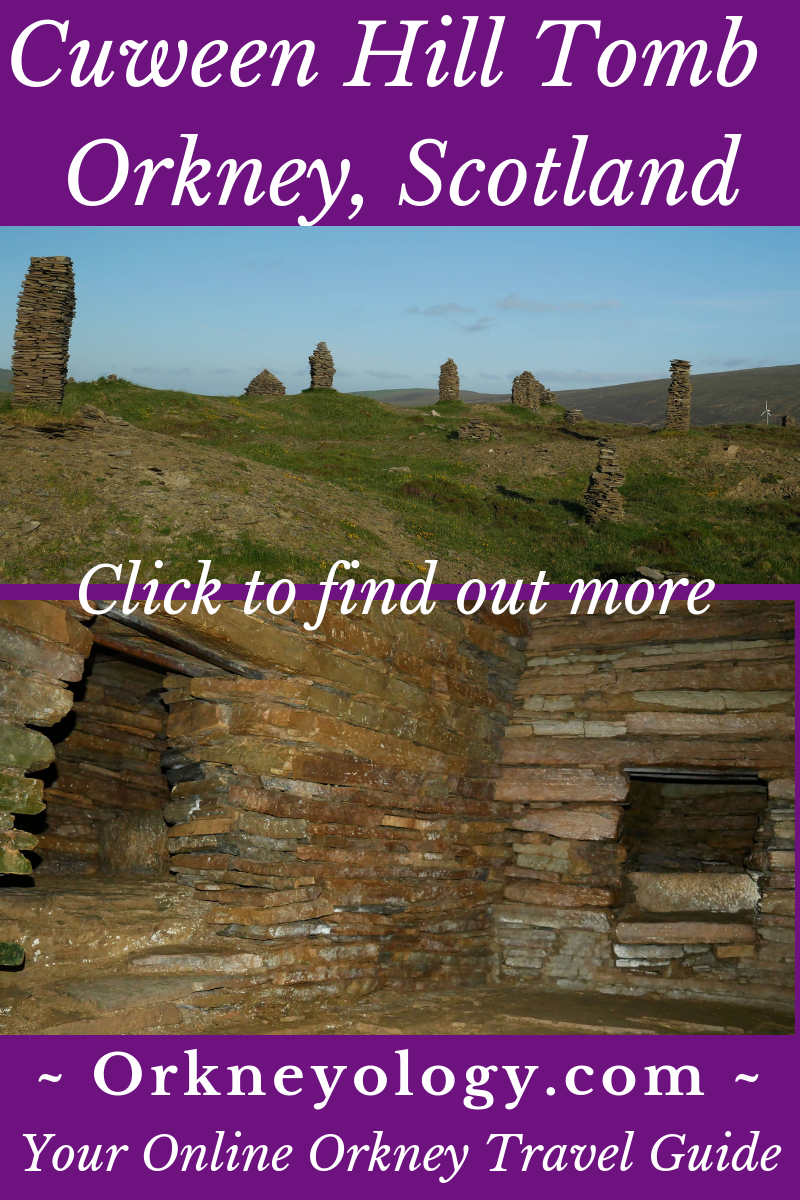